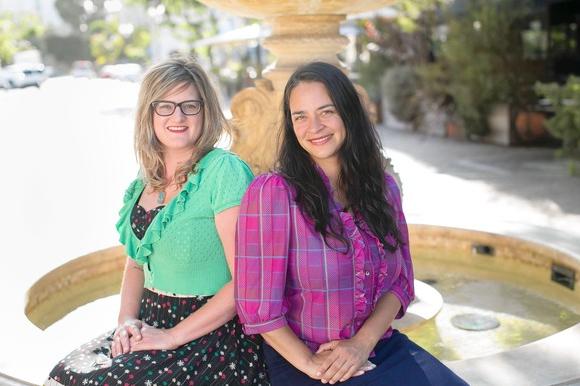 Erin Whitcomb had just returned from a friend’s 30th birthday celebration when she heard the news.

She’d been laid off.

Having dedicated 11 years to the PBS station in Seattle, she was devastated. In the throes of an identity crisis, Whitcomb packed her bags and moved to Orange County to be nearer to her fiance, Adam, a new graduate student at Chapman University.

Accustomed to working long hours, she suddenly found herself filling her days by cooking, reading and maintaining a sparkling clean house.

“I was going stir-crazy and there were simply no jobs to be had,” she recalled. ” I wanted to do something nostalgic and fun that would bring happiness into the world — sounds cheesy, but it’s true.”

That was when inspiration hit.

The longtime frozen treat enthusiast began experimenting with recipes and traipsing around to student film sets and wrap parties with her concoctions, so Adam’s classmates could try them. When they “freak[ed] out” and lauded her efforts, she took the next step — toward one blender and a pop cart.

Whitcomb, 33, of Orange, is one of about 120 food artisans poised to participate in Costa Mesa’s first-ever Patchwork: Edible Edition on Saturday and Sunday.

Brimming with enthusiasm over the imminent opportunity to attend Evan Kleiman’s pressure-cooking demonstration, Whitcomb said she also wants to learn about pickling and making lattes.

“I’m so excited to be participating in an event that not only encourages people to come and taste stuff, but to go home afterward and cook,” she said.

Creators Delilah Snell and Nicole Stevenson envision a summit featuring chefs, bloggers and vendors. Attendees can partake in a weekend’s worth of eating, learning and shopping at SoCo Collection, where the playbill includes food-inspired jewelry and apparel, panel discussions and hands-on workshops.

Patchwork debuted in 2007 as a festival that provides artists, craftspeople and vendors a venue to sell their goods — a service they felt was lacking in some parts of California.

Brainstorming over margaritas, chips and salsa, the women began with one word, “make,” on a sheet of paper and added others that came to mind. It wasn’t long before they combined “patch” and “work” from the collection of terms.

“Patchwork insinuates the making of something but also brings to mind the sense of community,” Stevenson said.

Stevenson, a do-it-yourself workshop instructor and founder of the clothing and accessories line Random Nicole, and Snell, an environmental education and food sustainability expert, decided to run with the idea.

Occupying a parking lot for about 25 cars behind Snell’s Road Less Traveled store in Santa Ana, they drew more than two dozen vendors and close to 500 guests. Since then, the biannual event has also reached Long Beach and Oakland, where several city streets are cordoned off to accommodate it. The growing turnout is also graced by live entertainers, photo booths and perhaps even a bike valet, hair dresser or pet sitter.

To the aunt-and-niece team, both 37, there is no greater pleasure than helping people do what they love. And not just as a hobby or downtime activity, but as something they can make a living from.