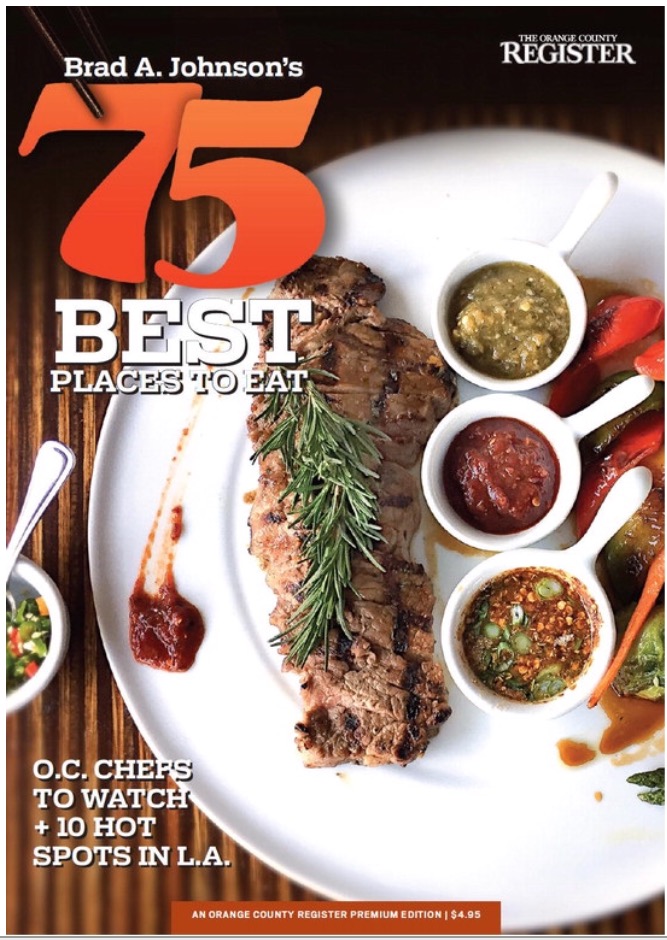 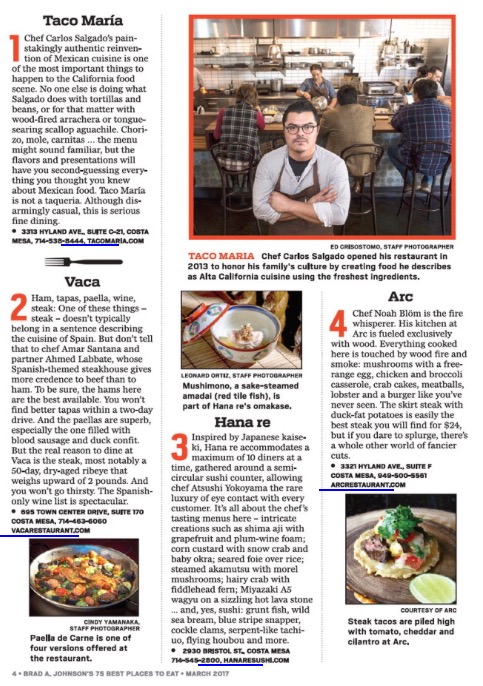 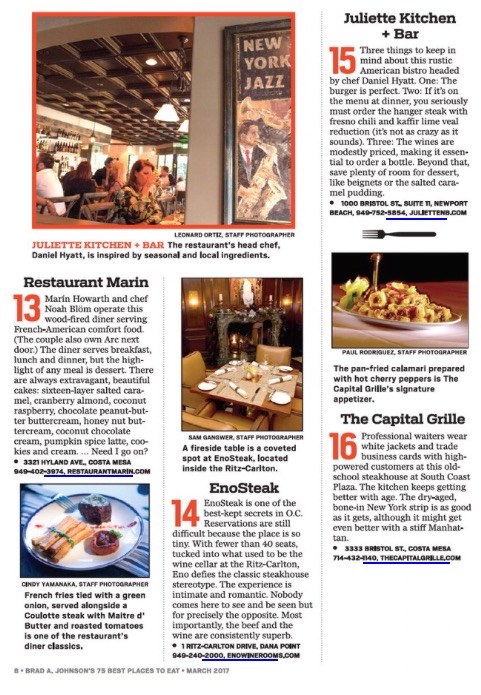 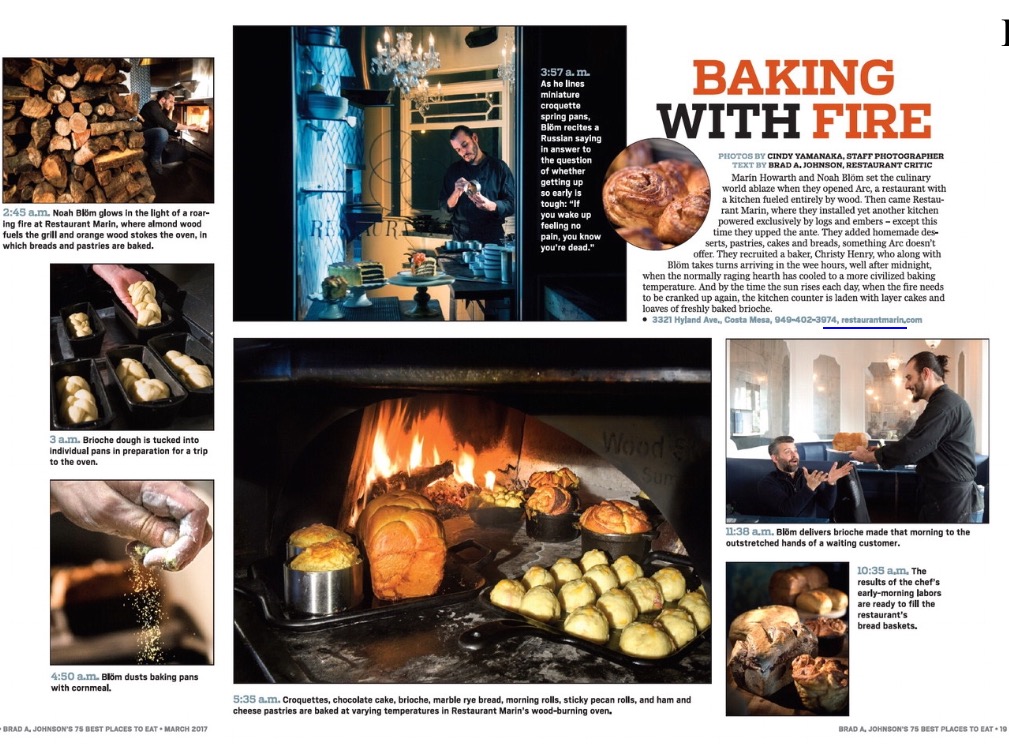 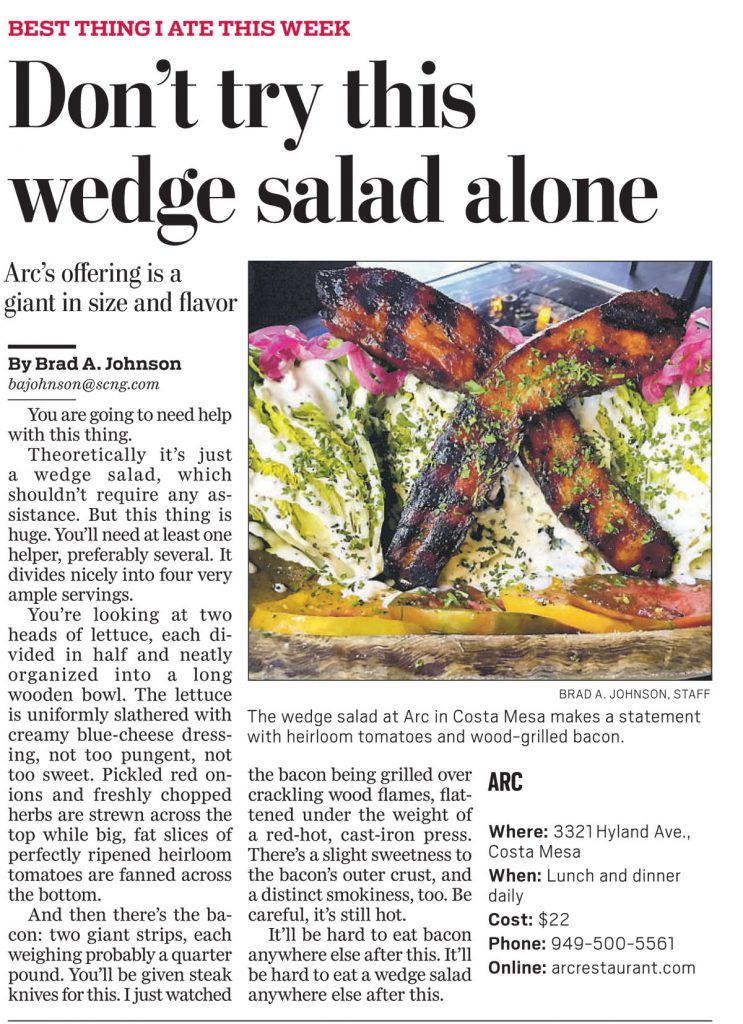 Read the articles on pages 14-15 of  Dining Out Magazine!

Here’s yet another reason to plan an Orange County road trip. After popping up in LA a few years back, Compton-based basics brand Drifter has debuted its first flagship at The OC Mix within stylish Costa Mesa shopping center SOCO Collection.

Known for its edgy-luxe essentials beloved by everyone from Kylie Jenner to Ruby Rose, the label soft-opened a few days ago and offers its full range of women’s and men’s apparel. Expect to find organic cotton tees, distressed dresses, drop-crotch shorts, and more athleticwear-inspired staples in monochromatic hues.

With its white tile interior, dark wood accents, and chefs wearing selvage denim shirts, Carlos Salgado’s restaurant, Taco Maria, fits right in at Costa Mesa’s OC Mix, a rustic-mod cluster of businesses that is one of the county’s antidotes to ’80s commercial malls. I like to come down here from L.A. and sit at the counter, eat, and watch the cooks work.

Name: Restaurant Marin, named after co-owner Marín Howarth. She and her husband, chef Noah Blom (he worked at Daniel in New York City), are also the duo behind Arc restaurant next door. Restaurant Marin opened in April.

Concept: The restaurant, located at the South Coast Collection shopping center in Costa Mesa, bills itself as a modern-day diner.  So there’s chicken pot pie, a fried chicken sandwich, pancakes, a patty melt and meatloaf on the menu — but it’s all more elaborate than what you would expect. Almost everything is sprinkled with pink salt before it leaves the kitchen. And instead of laminated menus and greasy booths, your food is served in a beautiful, intimate space outfitted with tabletops made of sea glass, distressed mirrors, chandeliers and short plush blue booths that curve ever so slightly at the ends. Howarth also designed the space.

Another favorable mention for our tenant!

I’m sitting on the patio enjoying my morning cup of coffee, watching a butterfly stumble through the jasmine-scented breeze, admiring the crystal chandeliers overhead. Gotan Project, a French band, plays softly on the stereo. The singing is in French, so I can’t understand a word of it, but it’s a soothing rhythm that makes me smile. It puts me in a vacation sort of mood.

“What’s a ‘Bunni breakfast?’” I ask the waitress, who also happens to be one of the owners.

Another recognition for our favorite Taco place:

Mall food conjures visions of bad stir-fry and soft pretzels. That is definitely not what Carlos Salgado, who trained at Coi and Commis, is doing at his Chicano restaurant inside Orange County’s shopping mecca, the OC Mix. He sources heirloom blue corn from Mexico, hand-presses tortillas, and stuffs them with everything from stone fruits and pork cheeks to chicken in ancho-almond mole. From $13.

Once again, I have found another terrific restaurant at SoCo. This one is called Restaurant Marin, named after the chef’s wife.

Taco Maria is the finest fine-dining Mexican restaurant in Costa Mesa right now. A local boy who eventually became the pastry chef at a Michelin-starred restaurant called Commis in Oakland, chef and owner Carlos Salgado returned to OC a few years ago to sling tacos and burritos out of a lonchera he named after his mom, Maria. But the truck, as great as it was, turned out to be just warm-up to this brick-and-mortar. At his now nationally-acclaimed restaurant, also called Taco Maria, Salgado has traded tacos for the sophisticated Mexican of alta cocina. A meal here will come at a leisurely two-hour pace, each course served with its own set of utensils. With a small crew and working in a kitchen in full view of his customers at the OC Mix, you can see Salgado is where he was always meant to be. He prepares only eight dishes, each of them thoughtful and flawless, served four per person for about $75 a head. The thing to do, of course, is to bring a friend, have them order the other four dishes, and then share each one.